We live in a world where the media and people focus on the hate toward one another, rather than focusing on the effects of self-hate.
We focus on police brutality and politics, not the fact that there’s an estimated 734,000 suicide attempts each year.
We complain about going to school; when most of us are unaware that on average two people commit suicide in just one of our class periods.
We live in  world where teenagers, adults, even our elders imprint in their minds that the only way to escape their sadness is to end their life.
What do we do about the estimated 30,000 people who take their lives each year?
How can we shed light onto those who live in darkness? 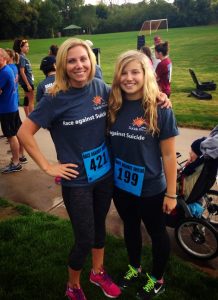 Earlier this year I participated in a 5K run/walk for suicide awareness and prevention.
When registering for this race, you had the option to write down the name (or names) of somebody (or multiple people) you know who committed suicide on a piece of paper.
After writing the names on the paper you pinned it onto your shirt.
I don’t know anyone who took their life so people wrote down names for me and pinned the paper on the back of my shirt.
I had the names of four people who committed suicide on my back.
And I walked for them.
I carried the memory of those four people and walked for every single one of them.
I walked for their family and friends who love and miss them.
I walked for hope that, one day, everyone will be aware of the effects of depression and suicide.
I walked in hope that, someday, our youth won’t become a memory by choice.
Less than 200 people showed up to that race.
A couple of months later I ran in the blacklight run, another 5K.
Over 10,000 people attended that race.
Over 10,000 people were willing to run while having powder thrown at them; but less than 200 people showed up for a race to raise awareness about a serious problem that’s killing our youth.

When a person does hear that a loved one is depressed they hurry hurry to the doctor to get some antidepressants.
We live in a world where we are under the impression that helping someone who’s depressed means means feeding them perscription pills and throwing them into therapy.
I wonder how that worked for some of  those 30,000 last year.

We need to understand.
We need to help.
We need to live in a world where someone won’t just be a memory by choice.

We live in a world where where teenagers, adults, even our elders imprint in their minds that the only way to escape their sadness is to end their life.
We need to raise awareness of depression and suicide.
We need hope for those who feel hopeless.
We need to save those who don’t believe they can be saved.